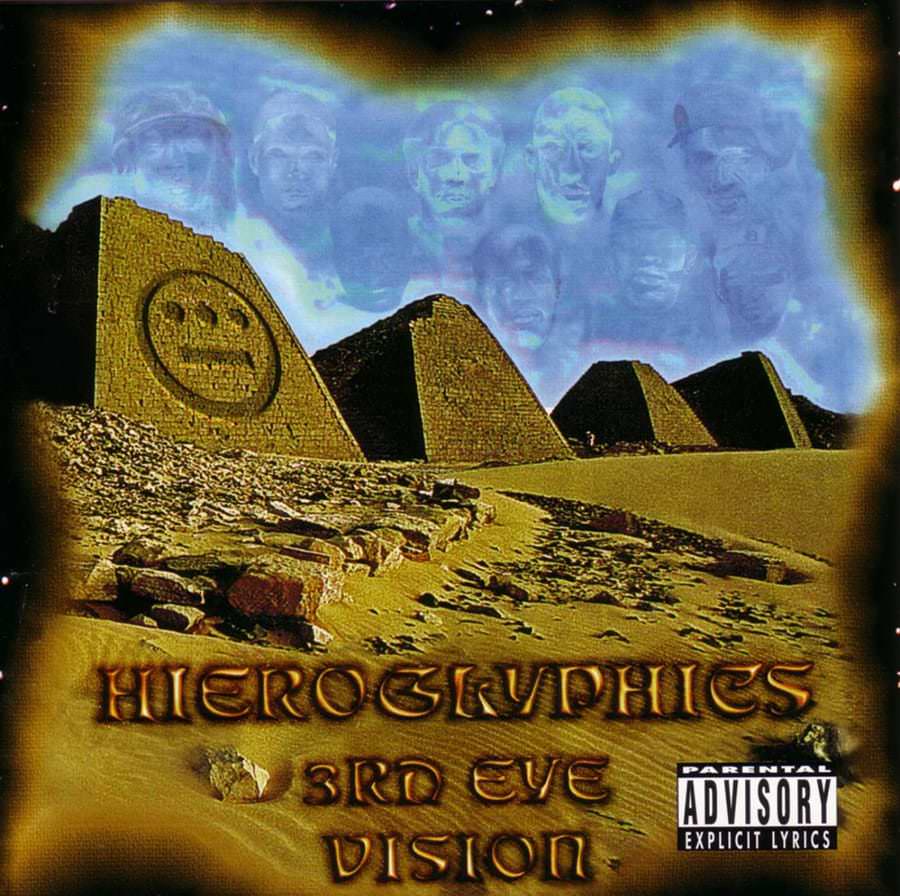 Happy 20th anniversary 3rd Eye Vision! This was a monumental album not just for hip-hop but for me personally and professionally as well.

When the individual artists of Hieroglyphics were all dropped from their respective recording labels (Del the Funky Homosapien from Elektra, Souls of Mischief, Casual and Extra Prolific from Jive), the members of Hiero and a handful of contributors fused together like Voltron and created our own company, Hieroglyphics Imperium, and worked hard to create and promote the very first Hiero “family album.”

On March 24th, 1998 Hieroglyphics released 3rd Eye Vision on Hiero Imperium Records and set the path for a prolific music career and dynasty.

Members close to the project have been sharing their stories on Instagram and I wanted to post a few here.

Happy 20th anniversary to Third Eye Vision! This was a very important album for us because it was a “get back up” project after our setback with major labels. As it turned out, getting dropped by Jive (Souls and Casual) and Elektra (Del) was the best thing that could have happened. This taught us to be resilient and also about controlling the destiny of our art by ownership. It also was a lesson of banding together for a common goal….this album, which at that point, was the test of whether we were going to be a minor foot note in Hip Hop or something that was lasting. Shout out to my brothers @hieroaplus @phestohierosoul @opiohierosom @casualrapgod @peplava @delhiero @djtourehiero @rapnoir (Tajai) and #jaybiz for believing in each other to make new music and establish our own company. Also, thank y’all for trusting me to lead the direction of our independent “third eye vison.” Also, i must acknowledge our engineer Matt Kelley, who also believed in our vision and truly made the album recording possible. There were many others involved that helped in different ways including, @dleemajors who was there at the beginning @stinke215 who kept us connected to our fans via hieroglyphics.com @jacobrosenberg who took all the pictures and Directed our videos. Frank Sosa, who handled our publicity and @ibookem who kept us on the road. Most of all, thanks to all the fans who wouldn’t allow our careers to go quietly. They showed up, bought merch (which basically funded our project) and most importantly, championed us to the uninitiated. Ya’ll were better than any major label marketing team. Much Love 🙏 #hieroglyphics #thirdeyevision #hiphop #1998 #hieroimperium

It was 20 years ago today when we released this? Damn. When I saw the cover being shared first I thought “we used Nubian pyramids on that cover and didn’t even know”. Next, I thought about all the executive work Domino put into making this album happen. That made me smile. Everyone worked hard to make this joint but coordinating such a big collective after everyone got dropped is admirable. He had a plan to record a group album and that started our company, Hieroglyphics Imperium. Came out the gate with 100k units indie, then did that with a few more albums etc. Today everyone is alive and well and I’m still proud to be a member of this collective. 20 years ago it started and just last month Hieroglyphics added to the legacy by acquiring another asset, more California real estate. Del started this crew at a battle between Tajai, A-Plus, and Myself. Del said, ” why y’all battling, we should be a crew”. We went to A-plus house and thought of a crew name. A few years later we changed it to Hieroglyphics. Fast forward about 30 years every still got bars and we continue to acquire assets, all from this Idea. That’s tight. Caused me to make a public salute to my gentlemen, Hiero Crew. #Salute

“You Never Knew” 20 years ago I was sitting in my apartment in Boston when my phone rang. It was @hierodomino and he shared with me the tragic news that the director Michael Lucero had died in an off-road car accident. Michael was an incredibly talented director and he made a handful of videos for the various @therealhierocrew members including the amazing “93 ’til Inifinity.” Domino told me that the crew thought I should direct their first video that Michael was slated to do. I told Domino that I was incredibly honored and grateful but that it was just too daunting of a task and too big of boots to fill. I simply felt like I wasn’t worthy. I hung up the phone. I sat in my apartment thinking and being afraid of not delivering a video to their expectations and caliber. And then, I stopped thinking about that and started thinking about the incredible trust and opportunity that had been bestowed to me. I thought about what my mentor would say and I called Domino back within 5 minutes and corrected my position, fuck that, I am all in. We flew to Hawaii and spent 8 days scouting the entire island of Oahu and methodically filming each member in a different part of the island. The video was an intentional tribute to what Michael did with “93 til” and meshing these artists with the raw settings of Hawaii felt oddly correct. I shot the video myself on a 16MM Eclair and I edited it on Adobe Premiere with a Video Vision Telecast video card. My producer/friend Alex Tse cleared locations or distracted cops while we stole shots and attached speakers and a discman to his backpack and stood off camera playing the music for them to rap too. I am forever grateful for the trust, friendship and opportunity that this seminal collective gave me. Happy 20 year anniversary to one of hip-hops finest and most time tested crews.

Below are a few of the features we created for 3rd Eye Vision on the old Hieroglyphics.com website:

The Making of 3rd Eye Vision

Director Jacob Rosenberg was in the studio while the crew was recording 3rd Eye Vision alongside engineer, Matt Kelley. There’s some great storytelling, photos and videos inside this jam-packed feature:

– The Making of 3rd Eye Vision

The recording of 3EV was continuously documented at Hiero Online in a section that became known as “3rd Eye Central.” It was a living journal of everything “3EV“:

Additionally, for the brave among you, there is an older news archive before the album even had a name and was simply referred to as “The Family Album.” Those posts from the World Wide Web’s halcyon days can be found here:

Here’s an interview with Domino in June 1997, almost a full year before the retail release of 3rd Eye Vision:

As a bonus, if you’re on a device with a large enough screen like a tablet or computer, I created a dynamic version of this interview (presented in “Stink-E-Scope”), available by clicking below: